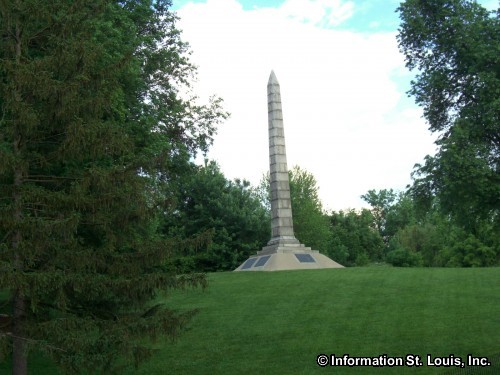 The Confederate Cemetery, located in Alton Illinois, is marked with a 58 foot high granite obelisk monument that has the names of 1,354 Confederate soldiers inscribed on it who died of small pox or other causes while in prison. 260 soldiers who died of small pox, while listed, are not buried there in the cemetery because they had been quarantined in a hospital on "Small Pox" Island and were then buried on the island.

For many decades, because of the flooding of the Mississippi River, any trace of the location of "Small Pox" Island, as well as the hospital and the graves, had been washed away. But in 1994, when the old Clark bridge was being demolished, human remains were found under one of the supports. These remains are thought to have been those of the Confederate soldiers that had been buried on "Small Pox" Island and demolition of this support was stopped. This area is now the Lincoln-Shields Recreation area on the Missouri side of the Mississippi River. The old Clark Bridge support is still there, as well as a monument, dedicated to those 260 Confederate soldiers.

Do you have a photo for North Alton Confederate Cemetery? Send it to us! Submit Your Photo